Japan is an interesting country. It is relatively small and ethnically homogeneous but all the places where I have been (Okinawa, Koyasan, Asuka and Osaka) are so unique in their own way. Osaka is the biggest city in Japan I visited but it definitely felt more like a friendly town (nothing bad about towns !). Maybe because of the Buddhist bible in my hotel room, maybe because of the nice and funny Kansai people (a regional stereotype… I know), or maybe just because I met with some very special friends when I was there.

My hotel was near Tennoji station which proved to be a prime location. It is close to the oldest Japanese Buddhist temple Shitenno-ji, a lot of shopping malls and the railway station, which allowed a very interesting range of activities. Despite cloudy days in March when I visited, I took a walk in the temples, the parks and the popular shopping streets, before I eventually escaped to the indoor shopping malls because it started to rain.

I had three days in Osaka and there were two special friends I needed to catch up with. One was Ryoga who is a Japanese young man I met 3 years ago when he visited Hong Kong. Back then my Japanese was so horrible I could only talk about rice, fish and eggs with him and his friend on the dinner table. I showed him around my university which now I know I hated. It was definitely not the most enjoyable first meeting and I thought we would never meet again. But us young people change an awful lot in three years.

Ryoga studied in the US and China and travelled a lot. I was ashamed to see the stagnant progress of my Japanese against his impressive English and Chinese abilities so I spoke to him in English instead. (I appreciated the most when he writes in traditional Chinese instead of simplified characters like 99% of the Mandarin students.) We spent a pleasant evening in Namba eating in a very local family restaurant, talking about our lives and futures. Although we will probably be at a different place in life the next time we meet, we know that we always have a friend in Japan, or Hong Kong, or wherever we will be. 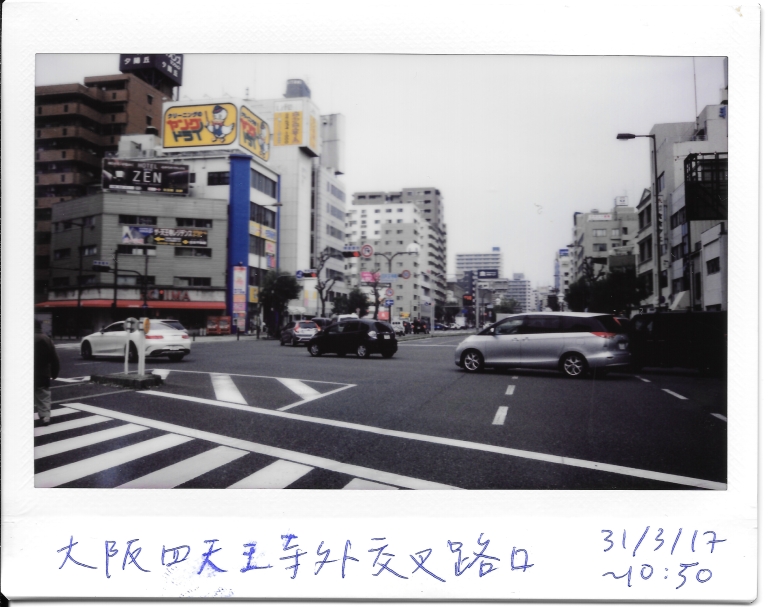 The other one was Tabata-san who is a Japanese grandpa I met 22 years ago when he visited Hong Kong for my one-month birthday banquet. Yes, I was a baby when we first met. I am sure back then my Japanese was also horrible because in general I just haven’t learnt any languages other than mumbling and gibberish yet.

Tabata-san was of course, not my friend before I met him this time. He was my father’s old business partner and he used to visit Hong Kong dozens of times a year. And then life happened. My father was no longer in the business and Tabata-san changed to a different company. A few years ago they connected again with emails and phone calls, and I spoke to Tabata-san once. Knowing that I would be in Osaka (where he lives), I knew that I had to meet him because my dad couldn’t be here himself.

At first, it was strange. Although we are both East Asians and we could look like grandfather and granddaughter, we spoke in English but not Japanese. That’s right, even Tabata-san spoke fluent English and he is more than 70 years old. He told me about his old friendship with my dad, his retired life and grandchildren. It felt like I connected with my dad before he got married and became a father, which is both amusing and frightening as I see how similar I actually am with him.

We met again as he would like to show me around the Osaka Castle (typical Japanese hospitality). That day I did feel like a granddaughter who spends one weekend a month with her grandparents on small outings and lunches. It wasn’t yet the week for cherry blossom, but Osaka Castle and the park were perfect places to walk around. Back in the city we had lunch in a Korean BBQ restaurant which was actually Tabata-san’s first time. After two beers, we talked about politics, money and life. We shared pretty much the same views on China, North Korea and their relationships with Japan. He told me about his surgery a few years ago. I asked him when does he think is the best time in his life. We talked for two or three hours before we left the restaurant, and had a short conclusion in the lift,

(Point to his brain) “My here is still very sharp.”
“I know. The older you are, the wise you get. It’s just sometimes, being too wise is tiring.”

I did not expect anything from Tabata-san although naturally I would want to know more about his friendship with my dad and how my dad was as a person. Throughout our meetings, I gained so much from his wisdom and life experience. One could really feel the power of time and the heaviness of life when you move past the almost reflex sympathy for older people’s wrinkles and slow movements, and actually have a serious, learning conversation with someone who has been on this earth much longer than you.

Respect for older people doesn’t mean treating them like babies and helping them with everything in their daily life. Respecting older people is exactly the same as respecting anyone else – see them as they are and treat them like you would like to be treated. Being an ageist is just as bad as being a sexist or a racist. This is also why I despise community visits to elderly centres where volunteers group a bunch of residents in a room and play stupid games with them for two hours. These visits are so popular here in Hong Kong because those “volunteers” find a hobby which make them feel so good about themselves that they blind themselves from the bored, annoyed faces of the elderly residents, and try to convince that life isn’t that bad when you are old and live in Hong Kong, which in fact is not true at all.

I know that this post hasn’t been very relevant with the title, but I can confirm that people in Osaka are very friendly indeed. Besides Ryoga and Tabata-san, strangers were really helpful when we were lost. In a shopping mall I encountered a South African man who wanted to buy some Japanese roasted green tea but the sales lady couldn’t really understand the English. I stepped in to translate before realising maybe I was too rude in disturbing their conversation, but the Japanese lady thanked me instead. And of course, this performer in front of the Osaka Castle confirms that Kansai people are funny !

waddle all the way